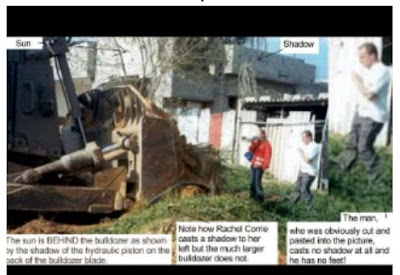 Lee Kaplan of DAFKA, StopTheISM and author of several articles on FrontPageMagazine wrote me and asked me to post about the real circumstances under which Rachel Corrie died. In the three videos below, Lee Kaplan, along with Becky Johnson, discuss the real circumstances surrounding the death of ISM anarchist Rachel Corrie in March of 2003 when she knelt in front of an Israeli bulldozer being a human shield while it was clearing suspected weapons smuggling tunnels in Gaza - and NOT a terrorist's house, which is what the ISM tried to pitch to the international community to garner support for their terrorist-loving cause.

These three videos (each one approx. 9 minutes long) include doctored photos from ISM (see above doctored photo-chopped photograph from the ISM site) The ISM released those photos on their own website maintaining they showed Corrie with a bullhorn confronting the bulldozer that killed her, then moments later after being struck.

However, a careful examination of the photos showed that scenes were staged with different tractors and at different times. One photo with a superimposed tractor in the foreground and Corrie superimposed with another ISM activist in front of a "doctor's house," when enlarged, not only revealed the superimposition techniques, but that the ISM (or PLO photographers who doctored the photos) left off the feet of the two ISM activists.

Actual video footage from the Israeli Defense Forces show the real circumstances under which the terrorist loving anarchist died: knee-deep in a trench in the middle of dirt in an open dirt field. The left arrow on the photo below points to the tractor, the right arrow shows the kneeling Rachel Corrie. To see the live action footage moments before Rachel Corrie's accidental death, go to the Part 2 video, approx 49 seconds into the video: 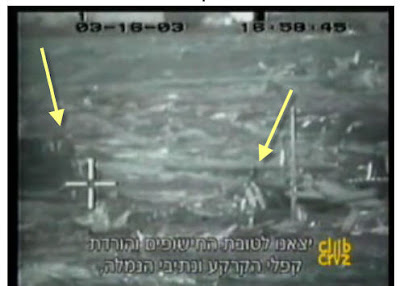 These are compelling videos which demonstrate the caluminous nature of the terrorist-loving International Solidarity Movement.

A big thank you to Lee Kaplan for going to Israel and obtaining the film from the IDF. For more information on the ISM, visit DAFKA and StopTheISM.
at February 12, 2008

SmoothStone is excited to announce that we have moved to our new site at: https://smoothstoneblog.net   Look forward to seeing you th...

Hey, Who's the Guy With the Sword?

Join us here at Smooth Stone along with other people of good conscience and put an end to the brutal terror of the Palestinian Authority complicit in the ethnic cleansing of indigenous Jews from their homeland of Israel.

Our goal is to educate the world in order to place intense pressure upon the entity calling itself "Palestine" to respect the human rights of the Jewish people who have returned to their restored homeland.

Jews are entitled to self-determination, to live freely in their homeland. Zionism is just as valid as Palestinianism, but even moreso because unlike the political "Arabian nation", the Zionist movement to "Palestine/the Land of Israel" represents a RETURN - not an invasion.

We are told that there is a difference between extremist Islam and peaceloving normal Islam.

Doesn't this mean that extremist Islam is the norm and normal Islam is extremely rare?

On Nov. 29, 1947 the United Nations General Assembly voted to legitimize the sovereignty of the restored state of Israel.

If the 1.3 million Israeli Arabs are a model of peaceful coexistence, why are the 250,000 Jews living in Judea, Samaria, and the Golan Heights an obstacle to peace?

There is not, nor has there ever been, a distinct "Palestinian" culture or language.

Further, there has never been a Palestinian state governed by Arab Palestinians in history. Nor was there ever a serious Arab-Palestinian national movement, until 1964, which was three years *before* the Arabs of "Palestine" lost the West Bank [Judea and Samaria] and Gaza as a result of attacking Israel during the 1967 Six-Day War (which the Arabs started).

Even the original so-called leader of the "Palestinian" people, Yasser Arafat, was Egyptian.

In short, the so-called Arab "Palestinians" are a manufactured people. They are a people with no history and no authenticity whose sole purpose for existence is to destroy the Jewish State.

It's ethnocentric to claim that only a certain ethnic group has rights to own land, as is the claim made by the Arabs. Why are Arabs the only ones entitled to self-determination?

What would have happened if Jews had repopulated their homeland, and the Arabs opened up their arms and expressed brotherhood as their response to Europe's genocide of European Jews?

It would have proven that it was not Zionism that caused this ongoing conflict, but the pan-Arabic racist reaction towards it.

Terror is not something one learns to live with. It is something which the Israel and US governments are obligated to completely destroy. No decent government should sit down and negotiate with murderers.

"We Arabs, especially the educated among us, look with the deepest sympathy on the Zionist movement...We will wish the Jews a most hearty welcome home." -- The Emir Fayzal to Felix Frankfurter of the American Zionist delegation, Paris Peace Conference, 1919. Reprinted in "The Arab Israeli Conflict: Documents Vol III, pages 42-49, John Moore, editor.

Smooth Stone provides a plethora of facts, data, statistics and links to other important sites.

Smooth Stone corroborates the actual facts against the mythology generated from Arab governments, Arab news sources as well as from Arabist and left-wing media sources.

Please view our archives and sidebar for more information.

Please email if you have any questions.

What Is What? Who is Who?

Click to view Smooth Stone's ongoing series of answers to your questions What is ? and Who is ?

The Religion of Peace

Demolishing the Myths of the Propaganda War against Israel

Sponsored by FrontPageMagazine, your free PDF copy can be downloaded here.


Palestinians are Aggressors, not Victims